Hot Topics: Substance Use Disorder and the Opioid Epidemic: Home

According to the Mayo Clinic:

Drug addiction, also called substance use disorder, is a disease that affects a person's brain and behavior and leads to an inability to control the use of a legal or illegal drug or medication. Substances such as alcohol, marijuana and nicotine also are considered drugs. When you're addicted, you may continue using the drug despite the harm it causes.

Drug addiction can start with experimental use of a recreational drug in social situations, and, for some people, the drug use becomes more frequent. For others, particularly with opioids, drug addiction begins with exposure to prescribed medications, or receiving medications from a friend or relative who has been prescribed the medication.

The risk of addiction and how fast you become addicted varies by drug. Some drugs, such as opioid painkillers, have a higher risk and cause addiction more quickly than others. [emphasis added]

According to the National Council of State Boards of Nursing:

Substance Use Disorder can affect anyone regardless of age, occupation, economic circumstances, ethnic background or gender. It is a progressive and chronic disease, but also one that can be successfully treated. However, published best medical practices cannot alone combat the Substance Use Disorder or the opioid public health epidemic. Only a multifaceted approach, including prescribers, regulatory authorities, pharmaceutical companies, employers, legislators, law enforcement, and the federal government has a chance at turning the tide of Substance Use Disorder and the opioid-related morbidity and mortality. [emphasis added]

What are opioids?
Scroll through Johns Hopkins University's definitions linked in the image below. 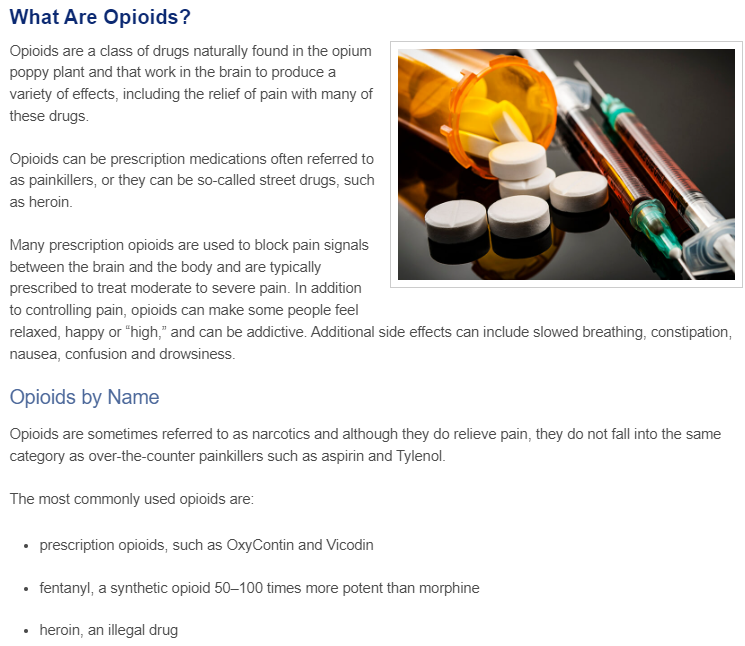 What causes opioid addiction, and why is it so tough to combat?
From TedEd

The American Nurses Association states that "[dealing] with opioid addiction is one of the most significant issues the U.S. health system faces today." They designed a series of resources, including best practices, information about the role of ineffective pain management in fueling the opioid epidemic, and proposals for how the situation can be improved on a national level, all of which can be found here.

The Opioid Crisis in the News

Need Help for Yourself or Someone Else?

You can use the Behavioral Health Treatment Services Locator, a confidential and anonymous source of information for persons seeking treatment facilities in the United States or U.S. Territories for substance use/addiction and/or mental health problems. From the U.S. Department of Health & Human Services' Substance Abuse and Mental Health Services Administration.