How will the online response option work?

Almost all households will receive an invitation letter in the mail with instructions for responding to the census online. The invitation will include a unique identification code called a Census ID or User ID. Using the Census ID helps the Bureau keep track of responses and prevent duplication. However, the Census ID is not required in order to respond online or by telephone. If respondents don’t have their Census ID handy, they can use their address instead.

The online questionnaire will be available in 13 languages (Arabic, Chinese [Simplified], English, French, Haitian Creole, Japanese, Korean, Polish, Portuguese, Russian, Spanish, Tagalog, and Vietnamese). If respondents have questions about the online form, they can contact Census Questionnaire Assistance for support in the same 13 languages. Respondents can also complete the questionnaire over the phone when they call. 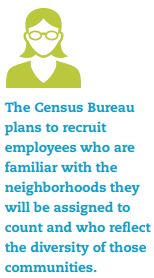 Who is at risk of being undercounted in 2020?

Historically, certain groups of people have been undercounted disproportionately by the decennial census. These groups are considered hard-to-count because the Census Bureau finds them challenging to interview, locate, contact, or persuade. Traditionally undercounted populations include young children, American Indians and Alaska Natives, people experiencing homelessness, and people of color, among others. The undercounting of these groups can undermine their political power and reduce access to crucial public and private resources in the communities
where they live.

Young children (ages 0–5) are considered hard-to-count. In particular, young Black and Hispanic children were overlooked at roughly twice the rate as young, non-Hispanic White children in the 2010 Census. Young children are undercounted, in part, because millions of them live in the types of households, families, and neighborhoods that are the most difficult to enumerate. Additionally, families are often unsure whether to include young children on their census forms. Special attention is needed to reach these households and make sure they report all
children, including babies, on their 2020 Census questionnaire.

Children are included in the population totals used for congressional reapportionment and the drawing of legislative district boundaries. When children are undercounted, political boundaries do not accurately reflect the entire population, and young children’s needs may not be appropriately represented or prioritized. Every year, more than $800 billion in federal funds are allocated to states and localities based on census data. Many programs whose funding is based in whole or in part on census counts directly impact young children’s lives,
including Head Start, Medicaid, and the Supplemental Nutrition Assistance Program (SNAP).

The Census Bureau recognizes a variety of groups as hard to count:

Will all households receive census materials through the mail? What about people who don't live in a household?

Some households will not receive census materials through the mail. And people living in group facilities, or whose home is transitory, are counted through different methods. The additional census methods and operations are described below. Anyone who is not sure how they will be counted will be able to call Census Questionnaire Assistance for more information.

The Census Bureau uses a different method to count people in group living situations, called "group quarters," such as college student housing, prisons, military barracks, and nursing homes. In some of those cases, the facility administrator will work with local 2020 Census office staff to collect the information for the people residing there; those individuals will not respond directly to the Census Bureau.

Some rural and all remote areas, such as those without reliable mail delivery or traditional mailing addresses as well as communities recovering from natural disasters such as hurricanes, tornadoes, and flooding, will not receive a mailed invitation from the Census Bureau. Instead, census workers will hand-deliver materials as they update the address list, or count households in person as they go door-to-door.

The Census Bureau will count people experiencing homelessness (and who are not part of a household) at the places where they receive services, such as shelters and soup kitchens. (This operation is called Service-Based Enumeration.) The Census Bureau will also conduct a count of people sleeping outdoors. In addition, the Bureau will count people staying in transitory locations such as motels, campgrounds, and migrant farm-worker camps, through the Enumeration of Transitory Locations operation. However, people who are staying in the home of a friend or family member as of Census Day should be counted on the questionnaire for that household if the person does not have a usual home elsewhere.

Information contained in this subject guide was adapted from the American Library Association publication Libraries' Guide to the 2020 Census, and 2020census.gov.