What will I be asked?

As required by the Census Act, the U.S. Census Bureau submitted a list of questions to Congress on march 29, 2018. Based on those questions, the 2020 Census will ask:

The Census Bureau will never ask you for:

If someone claiming to be from the Census Bureau asks you for one of these things, you may be the target or victim of a scam. For more information, visit Avoiding Fraud and Scams.

What is new and different about the 2020 Census?

For the first time, the Census Bureau will promote online response as the preferred method. The Census Bureau's mailing list will include an ID code for the householder (that is, the person responding for each household) to enter when they respond online in order to identify their address. However, if respondents don't have an ID code, they can enter their home address instead.

For many people, the online response option will make it easier and more convenient to respond. However, other people may prefer not to respond online, such as those with limited internet proficiency or who lack reliable internet access. If people have trouble with the online system or don't want to respond online, they can call Census Questionnaire Assistance for help or to respond by phone, also using the same unique ID number or giving their home address in the absence of one.

For the first time, the 2020 Census offers a way for the person filling out the form to indicate a same-sex relationship with another household member. This change (see Figure 1) is expected to improve national statistics on same-sex couples. 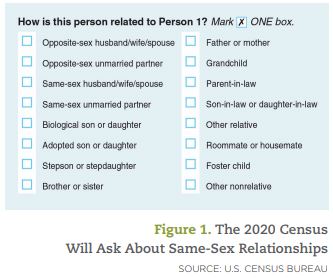 The Secretary of Commerce directed the Census bureau in march 2018 to include a citizenship question on the 2020 Census (See Figure 2). However, three federal district courts ruled against the inclusion of the question in early 2019 in court cases challenging the legality and constitutionality of adding it. The government has appealed those decisions to the U.S. Supreme Court, which is expected to issue a ruling in June 2019. Until the Supreme Court rules, it is uncertain whether or not a citizenship question will be included in the 2020 Census. 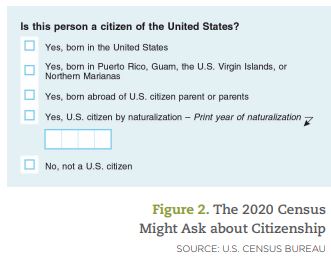 Advocates, including the American Library Association, have expressed concern about the addition of the question to the 2020 Census. "Adding a citizenship question to the 2020 Census would suppress Census response, distorting the statistics and making them less informative," said ALA President Loida Garcia-Febo in August 2018. ALA also joined other national organizations in an amicus brief to the Supreme Court opposing the additional question.

Whether or not the question is ultimately included in the 2020 Census, it is important to know that Title 13 of the U.S. Code protects the confidentiality of personally identifiable information collected on the census, including any information about citizenship status. The law prohibits the Census bureau from sharing personal census responses with any other government agency (at any level), court of law (including administrative courts), or private entity, for any purpose, including law enforcement. As an added protection, individuals' personal census information may not be used to harm them or their families in any way.

What happens to my answers?

Your personal information is kept confidential. The U.S. Census Bureau is bound by federal law to protect your information, and your data is used only for statistical purposes.

The Census Bureau combines your responses with information from other households to produce these statistics, which never identify your household or any person in your household. 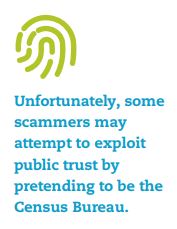 Information contained in this subject guide was adapted from the American Library Association publication Libraries' Guide to the 2020 Census, and 2020census.gov.